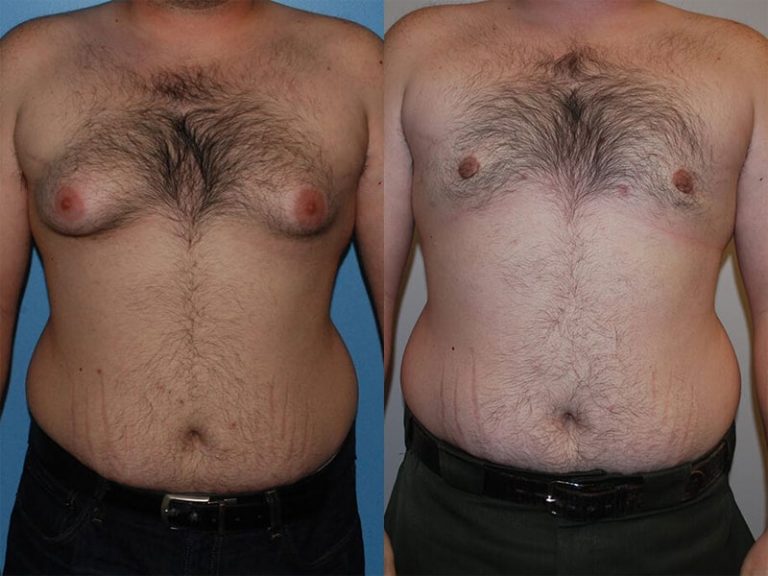 Gynecomastia is abnormal enlargement or swelling of the breast tissue in male which is caused by an imbalance of Estrogen and Testosterone hormones.

Gynecomastia can happen in one or both breasts. Indeed Gynecomastia is not a serious disease and occurs in many males who are going through puberty. In some cases the swollen breast tissue will go away without treatment but in the other cases Gynecomastia surgery is recommended.

After the puberty and by aging, the body produces less Testosterone hormone and this causes imbalanced hormone levels. By increasing the produced amount of Estrogen hormone in male, the breast tissue will enlarge and gets inflamed.

Some of the Gynecomastia symptoms:

In case of having pain, inflation, firmness and nipple discharge in one or both of your breasts (sometimes unevenly), you need to see a doctor.

Gynecomastia and its causes

Decreased Testosterone level can intensify Gynecomastia. The cause for this decrease can be increased Estrogen level. Some other conditions that can cause Gynecomastia:

Estrogen and Progesterone hormones are responsible for sexual changes in male and female. Testosterone controls the muscle mass and body hair in male and Estrogen controls breast growth in male.

Newborn boys are still affected by the Estrogen they received from their mothers. More than half of newborn males are born with enlarged breasts. But 2 – 3 weeks after birth these symptoms will go away.

During the puberty ages, we have the most hormone changes, that usually after 6 months up to 2 first years of puberty it will go away.

Taking some medicines can cause Gynecomastia. Such as:

Some disorders by affecting hormones, can cause hormone imbalance and Gynecomastia. Some of them are mentioned in here:

Is there any way to prevent male breast enlargement?

Following some rules will decrease the possibility of male breast enlargement, including:

As mentioned before, in most cases it resolve over time without treatment. Yet in case that breast enlargement or inflammation is caused by disorders like Malnutrition or Cirrhosis of the liver, treatment will be necessary.

If breast enlargement is caused by drugs, it is necessary to stop taking those medicine and replace another by doctor’s prescription.

If the patient is dissatisfied with his breast size, surgery will be recommended.

Male’s breast large size can affect their self-confidence which is totally normal, consultation with an expert will help.

Dr. Mahdi Ariana using the new technology operates Gynecomastia surgery through the least-incision. This way the least scar will be made on the skin of the patients. This is what really matters for athletes. For those who care about their skins appearance it’s important to think of it before the surgery.

Operating a surgery may be the main treatment for Gynecomastia. In the other hand using the wright methods and techniques is very important in order to prevent Gynecomastia’s comeback. In some cases incisions must be made only around the nipples. But in some other cases it must be made under the breasts. It depends on the breast size and the amount of the extra tissue in the breast, that which technique can be used. The doctor will choose the best technique by examining the patient and different test’s result.

Gynecomastia is a disorder related to the male. Men who have large breasts because of various causes will face some problems such as loosing self-confidence. The surgeon can find out its cause, and then suggest the best treatment. For some patients Pharmacotherapy can be the only treatment needed but others will need a Gynecomastia surgery.